So You Want Another Lhasa!

Oh, I totally understand wanting more than one Lhasa! After we bought our first Lhasa, Pheebe, we fell in love with the breed and HAD to have another one. We bought a second female, Buffy, a month later and the two girls grew up together.

We were very lucky that our two Lhasa girls grew up liking each other and not fighting to be "alpha." Of course, at the time we bought Buffy, we had no idea about "alpha dogs" and "pack leadership." We were just charmed by Pheebe and wanted another Lhasa. 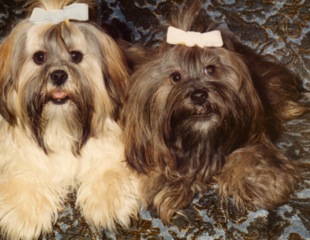 Our First Lhasas: Joyslyn's Miss Buffy Jo on the left. Joyslyn's Pheebe on the right.

As a person who has had multiple male and female Lhasas all her adult life, I can tell you that having two (or more) Lhasa girls works for the most part, but sometimes it does not. And often you really will not know until the younger girl reaches puberty and the older one realizes she might have a rival for top spot.

So, many years (37 at this writing) and many Lhasas later, when people ask me about getting a second Lhasa, I have some experiences to back up my opinions. Let me share a few:

First, I discourage doing what we did and buying two puppies at the same (or nearly the same) time. Puppies raised together tend to bond more to each other than to their human family.

Second, I discourage doing what we did and buying two females. I learned over the years that not all females share an affinity for each other. The girls tend to be bossy and opinionated. Some (not all) vie for the alpha role, challenging the other girls, throwing their weight around, and even starting tooth-and-nail fights to prove who is the boss. Some females will let it go, kowtow to the alpha, and live a happy life together. Others? Not so much.

But what happens if you get two who want to be the boss? Big trouble! For example, one of my friends had a strong-willed Lhasa female (I'll call her "Mopsie") who knew she was the top dog. My friend's second Lhasa ("Roxy") was a happy-go-lucky, even tempered girl who was willing to let Mopsie be boss. Then a young puppy ("Mindy") joined the group. One look at Mindy and Mopsie knew she would have a challenger. And Mopsie was right! My friend was adamant about the girls getting along, but they each had their own agenda and quite different ideas about what "getting along" meant to them. Each wanted to claim the alpha title. So as Mindy grew up the battles and skirmishes began, some more serious than others. Still my friend insisted on keeping them together. One day, she was standing with the two on her deck chatting with a neighbor, Mopsie on one side of her and Mindy on the other, when the girls attacked each other. Who knows why? Perhaps one disliked the way the other looked at her! The result was a trip to the emergency clinic and a nearly dead Mindy.

Now I know that some of you are saying, "But my two female Lhasas get along great together." You are lucky. So were we with Buffy and Pheebe. So are we now with the Lhasa girls we have. They all get along great. However, a firm believer in risk management, I advise people who come to me wanting a second pet Lhasa to "Get one of each sex" or to "Buy two males."

There are always exceptions to the rule, but generally a male and female will get along just fine. The boys tend to let the girls take over and boss them around and the girls, of course, think that is as it should be! When owners of a male come to pick up their new female puppy, I tell them, "Just watch, she's going to rule the roost in no time at all." I chuckle when I get the call or email saying, "You were right! He lets her do whatever she wants."

We have also found that our puppy buyers (with one exception) have had great luck with two males as long as both are neutered, which of course is a requirement when a person buys a pet puppy from us. That exception involved a dog who was so attached to his owner that he just did not want to share her affection. He resented any attention she paid to the new puppy, who eventually went to a different home for his own protection.

Another strong recommendation: When you have two Lhasas, give each his/her own crate to sleep in and feed them separately (i.e., don't require them to share a food or water dish). Don't give them a reason to become upset with each other over resources such as food, water, toys, bones. Sure you might find them sharing these things willingly, sleeping in each others' crates, or sleeping in one crate together, but that needs to be their choice, not something you force on them. Sharing is hard - ask any toddler (and even some adults!).

So, should you get two Lhasas? By all means if that is your desire! Life is great when you have a Lhasa to love you! Two just doubles the pleasure!


Please note: Permission to reproduce and/or circulate information in this article is granted. However, the article must be disseminated in its entirety and credit must be given to Joyce Johanson, Joyslyn's Lhasa Apsos. Thanks!