Brief History of the Lhasa Apso

The Lhasa Apso originated in Tibet, perhaps as long ago as 800 B.C., which makes it one of the oldest recognized breeds in the world. Research* has shown the Lhasa as one of the breeds most closely related to the ancestral wolf. (Others are Akita, Shiba Inu, Shar-Pei, Chow, Basenji, Alaskan Malamute, Siberian Husky, Saluki, Afghan, Pekinese, Shih Tzu, and Samoyed.)

Referred to in Tibet as Apso Seng Kyi, best translated as "Bearded Lion Dog," the Lhasa's primary function was that of a household sentinel, guarding the homes of Tibetan nobility and Buddhist monasteries, particularly in or near the sacred city of Lhasa. The large Tibetan Mastiffs guarded the monasteries' entrances, but the keen hearing and sharp bark of the Lhasa Apso served to warn residents if an intruder happened to get past the exterior guards. These little guardians were highly prized. It was believed that the bodies of the Lhasa Apsos could be entered by souls of deceased lamas while they awaited reincarnation into a new body. Lhasas in Tibet were never sold. The only way a person could get one was as a gift. 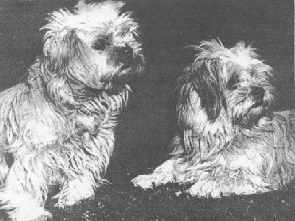 While the breed first came to the West in the early 20th century, the first Lhasa Apsos did not come to the United States until 1933. These two little dogs were gifts from the 13th Dalai Lama to Mr. and Mrs. C. Suydam Cutting of New Jersey. The Cuttings later received another pair of Lhasas from Tibet. Their Hamilton Farms' Lhasa Apsos were extremely influential in establishing the breed in the United States.

The American Lhasa Apso Club was founded on February 9, 1959. Club colors are turquoise and silver. ALAC's objectives are
1) to encourage and promote the breeding of pure-bred Lhasa Apsos and to do all possible to bring their natural qualities to perfection;
2) to encourage the organization of independent local Lhasa Apso Specialty Clubs in those localities where there are sufficient fanciers of the breed to meet the requirements of The American Kennel Club;
3) to urge members and breeders to accept the standard of the breed as approved by the American Kennel Club as the only standard of excellence by which Lhasa Apsos shall be judged;
4) to do all in its power to protect and advance the interests of the breed and to encourage sportsmanlike competition at dog shows, agility, rally, and obedience trials;
5) to conduct sanctioned matches, specialty shows, agility, rally, and obedience trials under the rules of the American Kennel Club.